The new season of “The Simpsons” is going beyond the call of duty in terms of delivering mathematical references. The episode “Simpsorama” hid five equations inside Bender’s head, and last week’s “Bart’s New Friend” included a reference to Zorn’s lemma. 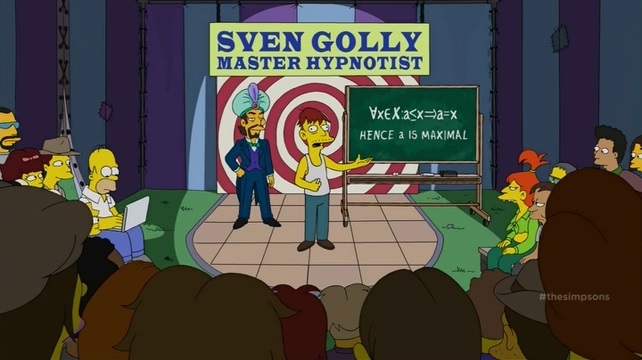 The episode (written by Judd Apatow) has not yet aired in the UK, but my understanding is that a visiting hypnotist (Sven Golly) puts Cletus into a trance and we hear him confidently stating: “Thereby proving Zorn’s lemma.”

Sven Golly snaps his fingers, breaks the trance and Cletus responds: “Dang, look at all them hobo signs.  My head bone hurts.”

Zorn’s lemma already appears in “The Simpsons and Their Mathematical Secrets“, mentioned in a couple of jokes in Examination IV:

Joke 4
Q: What’s brown, furry, runs to the sea, and is equivalent to the axiom of choice?
A: Zorn’s lemming.

Joke 5
Q: What’s yellow and equivalent to the axiom of choice?
A: Zorn’s lemon.

Zorn’s lemma is not trivial. One of clearest explanations appears on REDDIT provided by Hydreigon92: “Formally, Zorn’s lemma states that if we have a partially ordered set P such that all completely ordered subsets have an upper bound in P, then P contains a maximal element. He proved it around 80 years ago. For an example, let P = {1,2,3,4,5} (this set is totally ordered, so it satisfies the partially ordered criterion), and we use the standard order on the natural numbers where 1 < 2 < 3 < 4 < 5. Take any arbitrary subset of these five numbers, X = {1, 3, 5}. Is there an element (a) in P such that for all x in X, x <= a? The answer is yes, where a* = 5. This a* works for all subsets X, and a* exists in P, so a* is an upper bound in P. Zorn’s Lemma tells us that this set P = {1,2,3,4,5} has a maximal element, which we know to be 5.“

The episode ends with Maggie holding a flag that reads: Je Suis Charlie.” 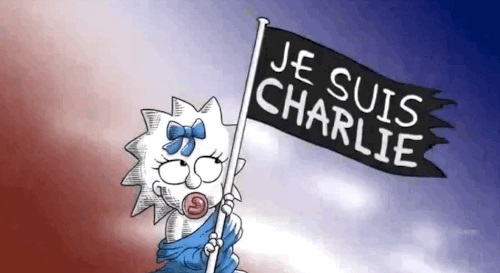