Yesterday (Sunday 7 December), UK fans watched SIMPSORAMA, the Simpsons/Futurama crossover episode. As promised by Al Jean when he was in London in September, the episode contained plenty of mathematics. 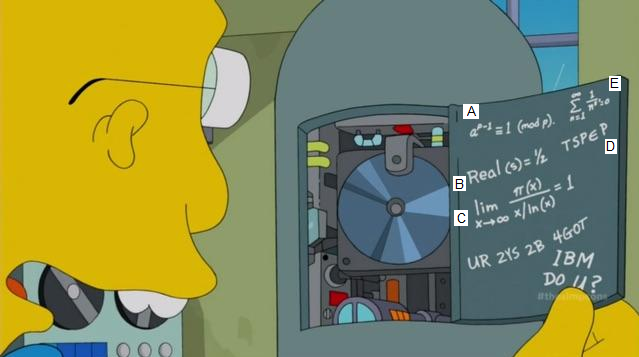 When Professor Frink looks inside Bender’s head there are five equations:

(A) Fermat’s Little Theorem – the basis for the Fermat primality test, as discussed by James Grime on Numberphile.
(B) The Riemann Hypothesis – an unsolved conjecture, one of the Clay Millennium Problems, and worth $1 million if you can prove (or disprove it). More at Numberphile (explained brilliantly by @EdFrenkel).
(C) The Prime Number Theorem – describes the distribution and density of primes. Again more at the wonderful Numberphile.
(D) The Travelling Salesman Problem – a problem that asks: “Given a list of cities and the distances between them, what’s the shortest possible route that visits each city once and returns to the first city”. The statement in Bender’s head states that the TSP belongs to the set of problems that can be solved in so-called ‘polynomial time’, but nobody has yet proven this statement. This is the third time that the writers of The Simpsons and Futurama have touched on this area, which revolves around the problem of P v NP, More at PLUS, which also looks at a film based on the problem.
(E) The Riemann zeta function set to zero – this sets up the Riemann hypothesis in (C). Again, there is an excellent explanation at Numberphile. Watch it carefully and you will be able to grasp the most important problem in modern mathematics.

Obviously, none of this appears in my book “The Simpsons and Their Mathematical Secrets”, but I will probably add to the epilogue in a few years time.