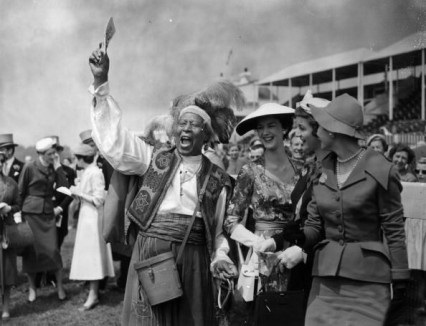 This is a rather odd post – nothing to do with mathematics or physics – about the amazing racing tipster Prince Monolulu, a man who has interested me for the last couple of years. Someone ought to write a book about Prince Monolulu, but in the meantime the sports journalist Dave Bromage has written this short piece on the anniversary of his death, Valentine’s Day.
(Prince Monolulu on Derby Day, 1954.)

IF you’ve been lucky enough to be given a box of chocolates for Valentine’s Day, spare a thought for Prince Monolulu, who died on this day in 1965.

Despite being a sport with many colourful characters, horse racing has never seen a character quite as colourful as famous tipster Monolulu.

He passed himself off as the son of a chieftain of a tribe in Abyssinia, now Ethiopia – his bright clothes, including an embroidered silk jacket, baggy pantaloons and plumed head-dress, making him stand out from the crowd at race meetings.

However, in reality, he was Peter McKay, son of a West Indies ship builder, and adopted his royal persona when shanghai’d on board a British ship heading for the African coast. He had hoped, wrongly, that being thought of as a tribal prince might afford him better treatment.

Arriving in England, via New York, aboard the Minnetonka in 1902, Monolulu joined forces with an Irish tipster at Epsom for the 1902 Derby. His trademark calls of “I’ve gotta horse” and “Black man for luck” attracted plenty of punters and he soon decided to go solo.

He travelled the UK and Europe, hawking quack remedies, performing in a ‘negro show’ and doing oddjobs around stables, building up important inside info, before he was held in Ruhleben internment camp for the duration of the First World War.

Returning to Blighty after hostilities ended, Monolulu rose to prominence at the 1920 Derby, tipping the 20-1 winner, Spion Kop – pocketing £8,000, a huge sum of money in those days.

He enjoyed a similar success in 1930 with Blenheim but was robbed on his way home and had to explain to his wife on his return to Camden that he had only threepence to his name.

His striking appearance and way with words saw him become a prominent figure on the racing circuit, although he was also regularly in court on charges as diverse as using bad language, disturbances at political rallies over Abyssinia and fortune telling.

However, he was always able to pay his fines and never went to jail.

His career was a rollercoaster. He met royalty and had cameos in films but was also robbed and beaten up several times.

His relationships, too, were eccentric. He claimed to have been married six times, though documentation exists only for three of those. His first wife, a Jewish girl, was allegedly taken away by Moscow police just after they had married in 1902.

Wife No2 was a German Catholic who left him and was killed in car crash soon after.

Then came another German, Elizabeth Arnold, who died in 1911, three years after their wedding.

His next two marriages dissolved, while he was also romantically linked to an Austrian governess in London in the 1950s.

Just before the 1964 Derby, Monolulu collapsed at Epsom and was taken to Middlesex Hospital, where he remained for several months.

Then, on February 14 the following year, he was visited by famous journalist – and even more famous drinker – Jeffrey Bernard.

Bernard had brought his interviewee a box of Black Magic chocolates – but the potential political incorrectness of the gift was the least of its problems. For Monolulu choked to death on a strawberry cream – an extraordinary way to go for an extraordinary racing personality.

So bear in mind the fate of this remarkable, self-styled Ethiopian prince today, and chew carefully.

Tweets by @slsingh
This site uses cookies: Find out more.