On Sunday night (3 Nov 2013), the members of Harvard Lampoon gave me a guided tour of the magnificent Lampoon Castle, a building once described as “sturdily honest as the founder who designed it, yet laughing at every turn with freakish gayety and beauty”. This is the spiritual home of many writers of ‘The Simpsons’, so it was a privilege to visit the Castle and a pleasure to meet some of the current Lampoon members.

Here is a picture from the Lampoon Castle that appears in “The Simpsons and Their Mathematical Secrets”, along with the caption. 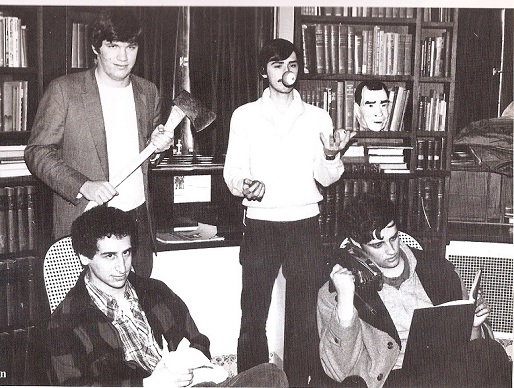 Al Jean (who is holding an iron) was in the room when Mike Reiss (seated, left) suggested Googolplex as the name of Springfield’s movie theater. This 1981photograph shows them while at Harvard in the “Lampoon Castle.” Patric Verrone, who is seen here juggling pool balls, is also a successful TV comedy writer, with a list of credits that includes a 2005 episode of ‘The Simpsons’ entitled “Milhouse of Sand and Fog.” The fourth member of the group is Ted Phillips,who passed away in 2005. Although he had a talent for writing, he went on to pursue a career in law in South Carolina and was a respected local historian. He is name-checked in the episode “Radio Bart” (1992) and also has a character (DukePhillips) named after him in The Critic, an animated series created by Jean and Reiss.

“The Simpsons and Their Mathematical Secrets” is the first of my books to contain the F-word. And I don’t mean ‘factorization. 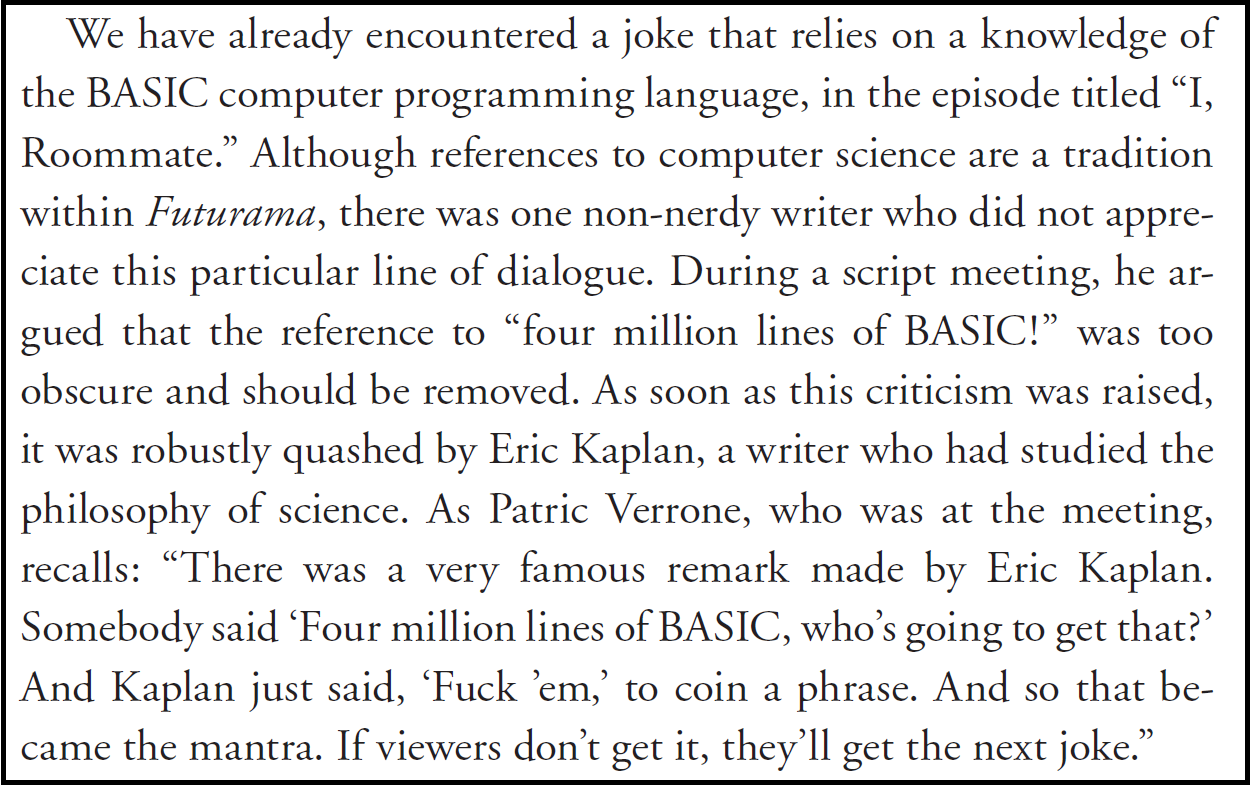 Here is an extract from “The Simpsons and Their Mathematical Secrets“. You can find out more about the book here.

Woo hoo! My latest online article is the most read piece on the BBC website!

There is one point that I could not fit into the article (due to lack of space), which I did cover in the book (The Simpsons and Their Mathematical Secrets). Below is an extract from the book covering that point.

This video of a “Levitating Superconductor on a Möbius strip” is via the RI Channel.

It reminded me of Chapter 16 in “The Simpsons and Their Mathematical Secrets”, where I discuss Möbius strips in the context of a Futurama episode titled “2-D Blacktop”.

Extract from “The Simpsons and Their Mathematical Secrets”

When I visited David X. Cohen at the Futurama offices in the fall of
2012, he told me about an episode in the upcoming season titled “2-D
Blacktop,” which will star Professor Farnsworth. Cohen explained
that the storyline involves the elderly proprietor of Planet Express turning
into a speed freak who soups up his spaceship in order to race it on
a Möbius drag strip.

Cohen revealed a few plot details: “Leela gets mad at the Professor
and they end up racing on the Möbius drag strip. Leela is leading, but
the Professor has this big racing move called the dimensional drift.
He spins the wheel while pulling the emergency brake, which causes
him to drift through one dimension higher than where he is. So, he
skids out of the third dimension, then passes briefly through the
fourth dimension, so he can reappear back in the third dimension
further along the track.”

Unfortunately, shifting up and down through dimensions also
leaves Professor Farnsworth traveling in the opposite direction to
Leela. Their vehicles collide head-on, thereby crushing them both
down into the second dimension! The next scene then takes place
against a dimensionally challenged landscape.