The screen grab above was taken from “Sky Police”, which aired in America in March. It is a really great episode with lots of great lines, but from a mathematical point of view the screen grab above stands out. The last line appears to conclude that:

Before explaining how something can be equal to nothing, let me know explain how this bit of mathematics cropped up in the episode.

In order to raise funds to rebuild the church, Apu teaches the congregation to card count; a strategy that allows a player to beat the casino at blackjack. When there are concerns about gambling in the name of religion, Apu replies that card counting is “math”, not gambling.

It should be no surprise that Apu knows about the mathematics of card counting, because I explained in “The Simpsons and Their Mathematical Secrets” that the episode “Much Apu About Nothing” reveals that Apu studied at CalTech. Of course, in this case, CalTech is not the California Institute of Technology, but rather the Calcutta Institute of Technology.

However, in “Sky Police” we learn that Apu attended MIT… the Mumbai Institute of Tantric Sex. That is where he learned to card count (something I have experimented with and written about in the past – “24 Hours in Vegas, or Debt in Venice”). Apu won enough money at blackjack to be able to attend the more famous MIT, the one in America. indeed, we see the blackboard during a brief MIT flashback. I have labelled the lines on the blackboard in order to help explain how an apparently logical series of steps can prove: 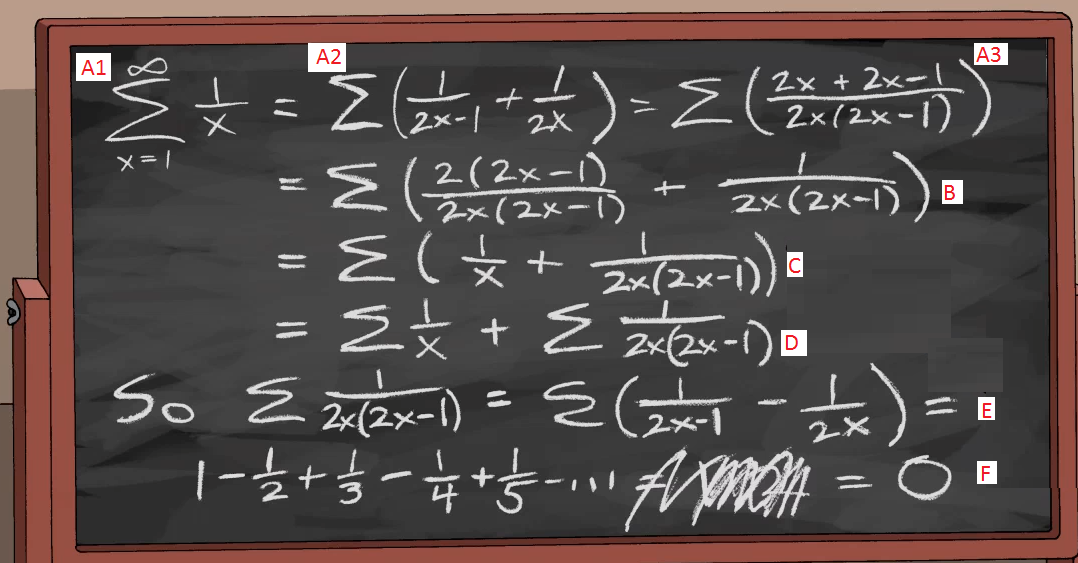 Line A – You might be thrown by opening line, which suggests that summation A1 equals summation A2. However, if you write out the terms then you will see that they are equivalent:

And a bit of shuffling shows that A2 and A3 are equivalent.

If A1 equals the two terms in line D, then we can cancel the summations of 1/x from both sides, which implies that the second term in line D equals zero.

Line F shows the terms in the summation in line E, which still equals zero. And that is why:

Obviously, there is a flaw in the mathematics. Can you spot it?

J. Stewart Burns, who suggested this paradox for the show, explained: “The issue of course is that the initial series is divergent.  Effectively, the stuff before the word “So” boils down to infinity = infinity + something.  From which I incorrectly deduce that something equals nothing.”

The sum of 1/n for n running from 1 to infinity is known as the sum of the harmonic series. As the terms diminish as n tends to infinity, it is not unreasonable to think that the sum might be finite, but there is a neat proof that shows that the sum is infinite. in fact, the proof is super neat and well worth a look.

The proof can be found at PLUS, or there is a video explanation at the Khan Academy, or another video at TANTON mathematics (but I should warn you that this last video leaves you with another paradox).